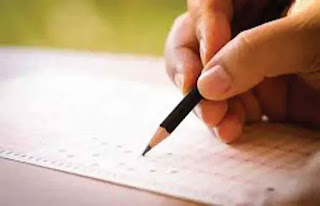 Complaints have arisen among students, guardians and teachers of the standard 10 paper being very difficult overall in today's board exams of 10th and 12th and 12th science.  This year, despite the first time the NCERT-based and new paper-style paper has been hard-pressed and especially in rural areas, the students will be disappointed more than last year.  While the biology paper for B group students was a lot easier overall, the students were happy.

The math confused the students

After the board canceled the 50 marks MCQ, according to the new paper style, with the question papers of 80 marks and taking the standard 10 exams for the first time based on the entire NCERT course in the state, the mathematical paper has complained of a lot.

After examining the first two papers, including first language subjects and science subjects in Std.10, the students who remained tough in the third paper were very disappointed today.

The math teacher also said that

Mathematics teacher Pranab Rajput said that today's paper in mathematics was weak and very attractive to ordinary students.  In the first year after the introduction of new courses and new paper styles, the mathematics subject paper will have a serious impact on the overall result of students who are very tough and this year more students will be disappointed.