As per the Government Resolution dated 3-7 2019 on the pay scale as per the Gujarat State Service Salary Improvement Rule 3, the State Government employees will be entitled to an inflation allowance at the rate of 1% from the date of effect on 1 st 2019. It has been decided.

The issue of raising the existing rate of inflation allowance to the government employees and pensioners by 5% from the date of effect of 1 7 2019 to 17% was under consideration of the Government. 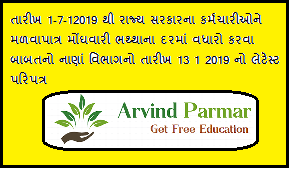 According to the provisions of the Resolution of the Finance Department dated 16 2016, all other allowances other than the inflation allowance shall be payable in accordance with the salary structure and rates found in the pay structure as per the Sixth Pay Commission, unless other orders are made according to the decision of the State Government.

In the inflation allowance, 50 paise and above will be paid in full, and no less than 50 paise will be calculated.

State Government and Panchayat employees will have to pay the inflation allowance on January 1, 2019 for the importance of the date 1 -7-2019.

The temporary surplus available to the state government pensioners from 1 7 2019 will be paid as above.

All the employees of the State Government and the Panchayat employees, who are owned by the Provident Fund Department, and the Panchayat employees, secondary and educational institutions of higher secondary schools, receive non-governmental school institutions, who are given the benefit of salary reforms as per the Seventh Pay Commission, with the approval of the State Government. Will apply to employees who have.

With this beneficiary change of the order, the primary teachers and the employees who have been transferred or transferred to the panchayat as well as the employees of the working department, who are approved salary reforms as per the Seventh Pay Commission, will be available.

Due to the dearness allowance allowed by the panchayats to their employees and the decision to pay the expenditure due to the inflation allowance given to non-government secondary schools to their teachers as well as to the institutions receiving aid grants, will be regularized. The costs incurred due to these orders will be treated as grants subject to the stipulation that the share of the allowance allowance in such a manner should not be more than the share payable to the employees of the state government. Will be accessible to them.