SCHOOL  GRANT is very USEFUL LATTER  for all principal
Education Department, Government of Gujarat by its GR dated 31-3-2010 (Annex-A)

constituted a Committee to re draft the Gujarat ( Bombay )Primary Education Act, 1947 and Gujarat 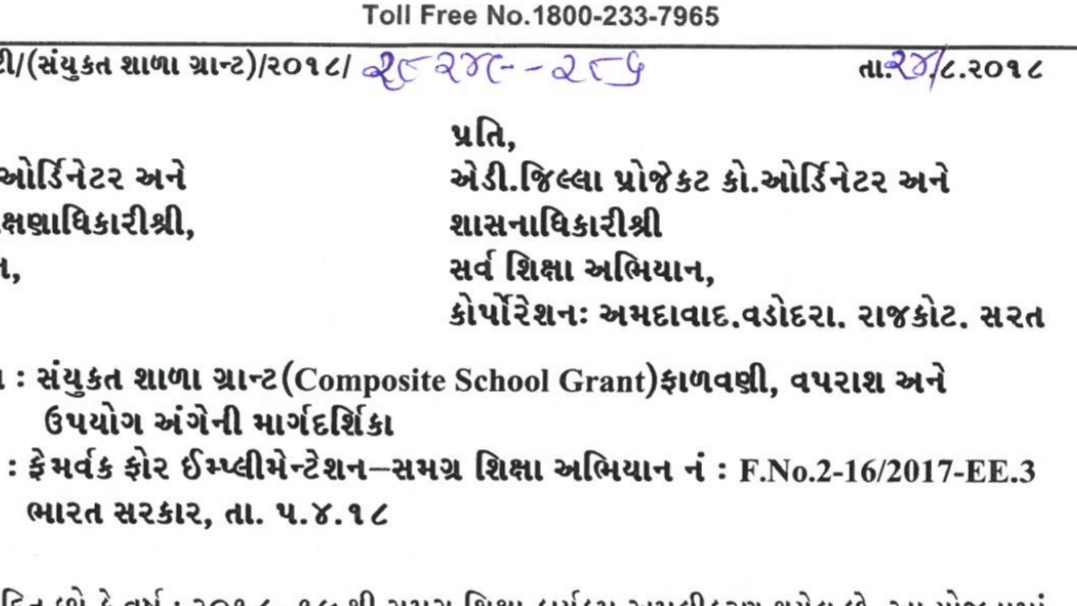 Compulsory Primary Education Act, 1961 in the context of, and in consonance with The Right of

Children to Free and Compulsory Education Act, 2009 (RtE Act) enacted by Government of India. The

admission of disadvantaged children and recognition of unaided schools in the RtE Act.

groups to work on

(i) admission of disadvantaged children to unaided schools

The Committee held meetings with teachers, school managements and association

representatives in Ahmedabad, Surat, Vadodara and Rajkot and greatly benefited from their views.

August 2010. As requested by the Education Department, the Committee submitted draft rules on the

admission of disadvantaged children and recognition of unaided schools in July 2010. Draft of revised

The Committee examined many complex and controversial issues associated with RtE Act. The

will explain the reasons for some of its recommendations:

The RtE Act increases Government control in elementary education and this could result in administrative malpractices. The Committee felt that there should be adequate checks and balances to reduce the opportunities for misuse of authority, particularly in the context of requirement of all unaided schools to obtain recognition. The Committee has recommended that all applications for recognition should be examined not by Education Department but by committees consisting of retired teachers andGovernment officials, and educationists; and grant of recognition or otherwise should be based on the report of these independent committees.

7 The RtE Act puts enormous responsibility on local bodies for successful implementation of free and compulsory elementary education to all children within their jurisdiction. While District and Taluks Panchayats, and Municipal Corporations in Gujarat are well equipped for this, most of the municipalities are not. The Committee was informed that out of 165 Municipalities and Municipal Corporations only

19 are providing elementary education and such municipalities, are called ‘authorized municipalities’. The remaining 146 have resolved that they are not in a position to take this responsibility and the State Government has therefore entrusted this responsibility to the concerned District Panchayat. The Committee was informed that the main reason for the refusal of unauthorized municipalities to manage elementary education was that State Government provided only 95% of expenditure and the remaining5% was to be borne by the local body. Since these municipalities did not have financial resources, they opted not to provide this service. The Committee was firmly of the view that ULBs cannot avoid this responsibility and recommended that as in the case of District Panchayats, State Government should fully reimburse to ULBs the expenditure on elementary education. The Committee has also recommended that even though the financial position of Municipal Corporations is stronger, this is nottheir core function and they should also be provided full grants and not 85% as per the present practice.

The Committee was of the view that primary education is not covered under 74th Amendment and that local bodies discharge this responsibility as an agent of State Government and are therefore entitled to full reimbursement of expenditure.