It’s a disease that has been leaping from animals to humans in Gujarat since 2011 and has the potential to explode to cause major health fatalities if gone unnoticed. This ‘ticking’ bomb — the Crimean Congo hemorrhagic fever (CCHF) virus — transmitted through bite of Hyalomma tick is spreading fast across the state.Read in Gujarati : Click here

Home Learning DD Girnar Live TV 31/07/2020 VideoS [ 3 to 12] Efforts are being made by the education department through different mea... 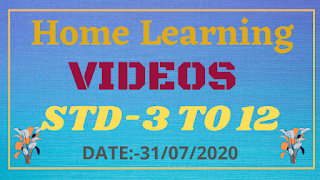